Wave power energy in the world

Machinery able to exploit wave power is generally known as a wave energy converter (WEC) and it is in full swing. According to the World Energy Council, there are more than 4,000 patents of wave energy converters; this shows that we are in a very active research field.

For many years Great Britain, Spain and Portugal have been investing in developing this type of energy capture systems.

For example numerous tests were performed in the British Isles, in Scotland for 11 years has been running a WEC of 75 KW in the island of Islay, the experience gained during that time much has allowed a replacement of that device for a higher one of 500 kW.

Portugal created the world’s first wave farm. It was located 5 km (3 mi) offshore near Póvoa de Varzim north of Porto in Portugal, and was designed to use three Pelamis wave energy converters. This device is made up of connected sections which flex and bend as waves pass. The farm had 2.25 MW in total installed capacity.

Both in the Nordic countries of Europe as in Korea and Japan are creating devices to capture this energy from docks and even in Japan a yacht has been developed a yacht to use wave energy for moving and lighting.

There are also experiences in the South American area, like Ecuador, Chile and Brazil. In this last mentioned country, a project capture the energy of the waves in their pounding against a breakwater is underway and is currently managed by the Federal University of Rio de Janeiro in the State of Ceará.

The Department of energy of the United States of America (DOE) has set a series of goals to achieve the energy self-supply; in this way it is working hard on developing biofuels, wind, solar and geothermal energy, as well as the wave energy, giving place, in 2010, in Oregon to the first U.S. site for a wave-power farm.

We will show below some of the more important devices, currently used in the world: 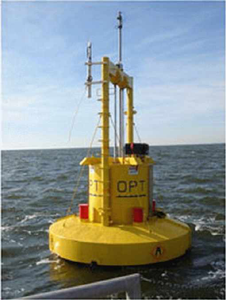