In the course of the last two centuries there has been a vertiginous use of non-renewable energy resources. Both coal and oil and gas are being used more intensively to cope with the urgent global energy demand. This could be a positive sign for the welfare of the world’s population but it also represents a dramatic factor in climate change conditions in our home planet.

The continuous increase, in the atmosphere, of greenhouse gases from the combustion of hydrocarbons is producing climatic changes with direct consequences. The most significant change is represented by the increase in global temperature which brings the decrease of the ice caps in both Arctic and Antarctic Zones, and the continued decline of the continental glaciers. On the other hand, we undergo an increase in the frequency of droughts, hurricanes and floods in places where these phenomena were not usually recorded.

The decline of the world’s non-renewable energy resources jeopardizes the development of future generations and also generates scenarios of armed conflicts for the domination of the few resources that still exist.

It’s time to take under consideration a radical change such as the use of hydrocarbon resources only for the production of basic inputs like chemicals and plastics, thus avoiding combustion processes and producing a shift to technologies that make use of sustainable alternative energies for the generation of electrical energy. The use of renewable energy will allow a real change in the lives of mankind since the environmental impact is almost null and its supply is inexhaustible.

The model to follow is being carried out in countries like Germany, United Kingdom of Great Britain, Holland, Spain, Portugal, Korea, Israel, Japan and the United States of North America where the research, the development and the foment of alternative energy are state policies.

Aplication of the term Wave power

The term ‘Wave Power’ comes from the term ‘wave’ and it applies to marine waves in close and remote areas from the shore (middle and off shore) as for the extinction of the wave, that means waves happening in the coastal strip (on shore). Our project is linked to the use of this energy in middle and coastal areas, due to the fact that in this strip the maximum amount of energy is obtained.

This phenomenon is mainly of surface wind-induced characteristic because it originates from the friction of the wind on the sea surface; other factors such as tides and currents can act but these are less important.

Wave’s growth and development are presented in Figure 1. 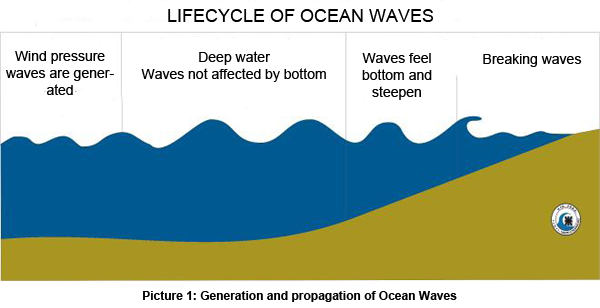 We must remember that renewables are characterized by their variability and intermittency, but in the case of Wave Power there is an international consensus on its consistency, since in certain ocean regions a marked persistence occurs during most of the year ensuring the continued operation of the devices.

Ocean waters act as accumulators of the energy transferred by the wind, the amount of energy collected by the oceans depends on the duration and intensity of the winds.

The advantages of this type of energy are:

The wind is present in certain areas of our Patagonia almost all day throughout the year, meaning that both its regularity and intensity allow us to foresee a continuous supply of energy. On the other hand, if no wind action is registered in the catchment area, the presence of waves will still be noticed since they are transported by the water from distant regions. The extreme case that exemplifies this phenomenon is giant waves (tsunami), which travel thousands of miles far from the place where they were generated.

The Patagonian coast presents an optimal setting of work due to the shallow seabed, even at considerable distances from the coast; this will facilitate the installation of equipment and devices.

Water proves to be a remarkable energy vector, it is known for its energy storage capacity (this topic is widely recognized from the hydroelectric ventures); the energy that can be harnessed is superior to other renewable alternatives which are currently more widely spread, this is because the density of water is superior to air (835 times).

The total amount of electricity that could be generated annually from renewables energies is 975 010 TWh. In Table 1 it can be visualized how this grid is constituted:

To the purpose of putting in context the above said with the generation of electricity in the world,it is presented in Table 2 the different sources of electricity obtained in 2006. The total amount of electricity generated worldwide was 19.015 TWh.

UNESCO in 2009 issued an energy related bulletin, which reported that the amount of wave energy available in our planet was 200GW approximately, if we consider that our country (Argentina) has a power consumption of about 75 TWh per year, by a simple calculation: 200 GW x 365 days x 24 hours is equal to 1,752 TWh / year, meaning that only 2.34% of global wave energy could meet the electrical requirements of our country.